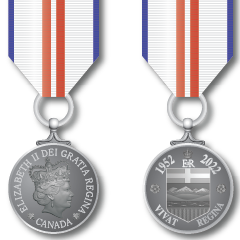 The Queen Elizabeth II's Platinum Jubilee Medal (Alberta) was created to mark the 70th anniversary of Her Majesty's Accession to the throne as Queen of Canada.
The overall purpose of the medal program is to recognize individuals who have made significant contributions to the province or particular region or community. The medals honours The Queen and her lifelong service to Canada, as well as those residents of Alberta who, like Her Majesty, have devoted their lives to making this province a better place.
Eligibility Criteria
Medal recipients must meet the following criteria:
The Lifesaving Society's nominations committee will be looking for individuals who:

Nominations can be made through the form below. All submissions received are confidential and only selected individuals will be notified of the result. Individuals being nominated should not be made aware that their name is being submitted for consideration.
Nomination Form
Deadline
Nominations must be received by September 25, 2022 at 11:59 pm.
Exclusions
Some individuals have already demonstrated their contribution to the province, such as MLA's, Mayors and Reeves, Indigenous leaders, as well as members of the Alberta Order of Excellence are designated recipients of the medal and shall not be nominated through this process.
All nominations must be an individual. Nominations for a group, couple, or organization will not be accepted.
Self-nominations are not be permitted.